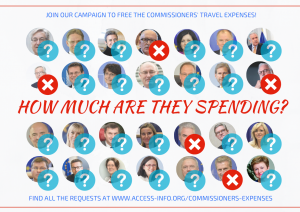 Last Monday, 13 September 2017, EU Commission President Juncker held his annual state of the Union speech in which he laid out his vision and priorities for the EU in the coming period. Calls for and responses to greater transparency are a recurrent theme in discussions on how to improve the EU.

Consequently, it comes as no surprise that new transparency measures were announced in the wake of the speech. The new measures follow in the wake of a public campaign organised by the NGO Access Info Europe in which 120 citizens across Europe requested access to all travel expenses of the 28 Commissioners, which was refused, appealed, and brought to the European Ombudsman when the appeal still did not result in the requested access, the Commission has now decided to adopt a new line on disclosure of travel expenses. A new code of conduct is set to enter into force on 1 February 2018 which foresees in the bi-monthly disclosure of all Commissioners’ travel expenses.

Access Info Europe ‘cautiously welcomed’ the announced code of conduct, but pointed out that ‘the devil is in the detail’, including the precise information that will be proactively disclosed. The European Ombudsman, whose investigative case on the matter is ongoing, was also measured in her praise. She said that she would “examine the proposed changes in detail, in particular to verify that the new rules satisfactorily address issues that have been raised with my office”.

The announced measures are a new step in a series of measures taken by the Commission Juncker to increase trust in the integrity of the institution by stepping up proactive disclosure. At the start of its term, incoming vice-president Timmermans announced transparency as one of the Commission’s top priorities. Past Commissions have struggled with alleged and established cases of corruption, leading to the forced resignation of Commissioner Dalli in 2012 and the entire Commission Santer in 1999, as well as a several withdrawals of Commissioner candidates.